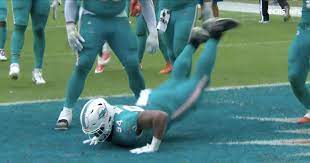 I have grown tired of the narratives that is being spewed out by the Media, it’s boring and lazy reporting based off of nonsense. From “The Patriot Way” to “New England South” it is just non-stop comparing Miami’s head Coach to the G.O.A.T.

There is a stark difference and at the same time similarities that we need to realize.

First, I will say I have no problem with Brian Flores adopting the winning ways that he learned under Bill Belichick and I hope that the Dolphins under Flores will eventually mimic that success on the field and in the playoffs. So, it’s time to stop looking at what Flores is implementing as if it’s a negative.

Second, despite Flores mimicking the wining culture he learned under Belichick he has not tried to be like Belichick. Brian Flores is not as rigid as Belichick and the photo above in my caption is all you need to see the substantial difference. Do you think Bill Belichick would allow Christian Wilkins to do the worm? I don’t!

Flores is an exceptionally good head coach and can be a great head coach in time and just like I have been preaching with EVERYTHING DOLPHINS we all need to be patient and allow this team and its management do their jobs a job I say they have been doing very well!

2 thoughts on “The Difference Between Belichick & Flores?”