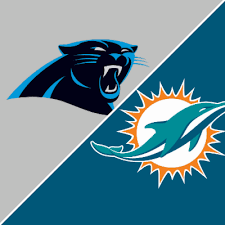 Riding a three-game winning streak our Miami Dolphins (4-7) face another formattable opponent as the Carolina Panthers (5-6) come to Miami to play. Carolina has lost 2 of their last 3 games but they did re-sign and start Cam Newton who played very well in his first game despite losing to The Washington Team.

The Panthers Defense had an off game last week so I expect them to rebound and play a lot better this week in Miami. Miami’s Defense has found their stride and is the big reason the Dolphins are on a 3-game win streak. Tua also has done very well his last three out of four games with over an100 QBR 6TD’s and 4 INT’s.

Miami needs to start fast and sustain offensive possession The Dolphins (4-7) have won their last three games behind their defense, which has created seven turnovers in that stretch. Miami still possesses the worst pass defense in the league but they have played better of late and hopefully as our young safeties continue to grow the back end of our defense will solidify what has been the biggest disappointment is the poor play our two highly paid veteran CB’s especially the one who held Miami hostage for more money from his Pro bowl season last year.

Miami’s rush game has been pathetic throughout the year as they have rushed for over 100 yards just 3 times this season and if you are a regular here you know my frustration over the past two drafts as they passed on two of the top RB’s coming out of the NFL draft (Johnathan Taylor (2020) & Najee Harris (2021) both top 10 rushers, Taylor leads the league in rushing yards (1,122) and total touchdowns (15) !!! (SIGH) It is funny how they are scrambling now to add RBs to the roster!!

Myles Gaskins (Ranked 28th) has done more than can be expected for an RB drafted in the 7th round but he is not a power RB due to his stature and that is why I wanted Miami to get Najee Harris this year in the draft.

Panthers RB Christian McCaffrey is the kind of RB we need but he is on the other side of the field and Miami’s defense NEEDS to contain him as well as Newton as they will try to run the ball down our throat today.

Miami and the Panthers are still in the playoff hunt despite both being under .500 and this game is important to both as their margin of error is very slim!

Miami’s offense and specifically Tua Tagovailoa has been improving and has been looking better during this resent winning streak Tua is averaging 235 yard passing a game in the last 4 games and he has not played100% of those games. Miami still needs the running game to improve, the Offensive Line also has improved but still has a way to go to be considered a good line.

The key to winning is shutting down the Panthers two best weapons Newton & McCaffrey and their rushing abilities. Newton’s arm is not what it was but his legs is still his best weapon. If they can contain Newton like they did Lamar Jackson Miami should win this game.

Run the ball, stop the run, take some shots down the field like they did last week, avoid turning the ball over, get turnovers….and they will win!

4 thoughts on “The Panthers @ Miami (Preview)”