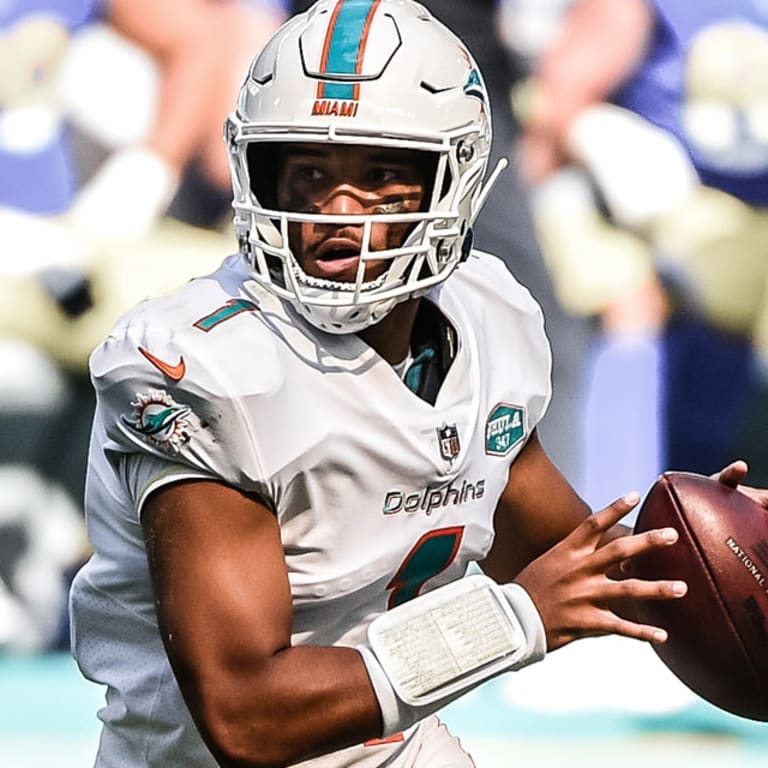 I have been cautious in my support of Rookie QB Tua Tagovailoa and in fact if I were Miami’s GM I would not have drafted him, not because of some dislike for Tua but at the time I truly wanted Josh Rosen to get his fair shot in Miami after his unfortunate start to his career. So I felt Miami didn’t need to draft another QB.

I will admit on a rare occasion that I was WRONG!

Tua Tagovailoa was one of the best QB’s to play in college and in fact he played for my favorite college team Alabama and still I was ambivalent when it came to the Dolphins drafting him as their future QB.

I did have concerns about his injury history (and still do) and what the future holds especially considering the severity of his hip injury almost exactly one year ago today!

I am not really sure why I am not as hyped as many others are about Tua, but one thing is sure I am starting to get that feeling and after his play last week against Arizona and almost neutralizing the play of Kyler Murry who had an awesome game against one of the better defenses in the league, I saw a glimpse of what is potentially the future of our Rookie sensation as he put on a clinic against the Cardinals especially in crunch time.

First of all that game last week against the Cardinals was one of the best matchups this seasons as the game went back and forth as both teams were making plays and scoring at will. Miami just made a few more plays and specifically our Rookie QB Tua Tagovailoa.

The game went back and forth as the scoring started when Miami’s Defense lead by Emmanuel Ogbah who had another strip sack that lead to a TD (2nd week in a row) when he got to the elusive Kyler Murry early in the first Quarter, Kyler Murry wasted no time making up for that fumble as he drove his team down the field and as was throughout the game he passed and rushed his team all the way down to tie the score.

Tua was not to be outdone as he also lead a drive using his legs and precision passing to get Miami back on the score board and regained the lead 14-7 by the end of the first quarter. Kyler Murry did not let that score go unanswered as he lead his team on the next possession and with a 56 yard strike to WR Kirk (who torched Miami’s defense all day) and tied the game at 14.

Once again Tua had a response as he lead Miami down to field and with a perfect pass to Preston Williams near the goal line and with a diving move Williams was able to score the TD and get Miami the lead again 21-14 in the second quarter with 10 minutes to go!

After a stalled drive by Miami the Cardinals Kyler Murry leads them to another scoring drive that gets them the lead 31-24 at the end of the 3rd quarter on a spectacular run by Murry!

Tua now shows us why he is the real deal on this next possession and they enter the 4th quarter “Crunch Time” and he leads a 93 yard drive down the field and throws the game tying TD on a strike to WR Hollins making the score 31-31!

The next possession by the Cardinals was stopped after taking some time off the clock as our Defense who had a rough day made the crucial stop in crunch time that gave Miami’s offense the ball and Tua was able to lead the Dolphins down and get within field goal range on a 4th and 1 and while many 2nd guessers wanted Brian Flores to go for it he decided to kick the field goal and that gave Sanders his 20th in a row a franchise record and Miami a 34-31 lead!

Kyler Murry once again had the ball and plenty of time to tie or take the lead in the game but once again our bend not break defense made a crucial stop that put the Cardinals in 3rd and 1 a situation that Kingsbury always ran Murry throughout the game but this time decided to run the ball with his RB and Miami’s defense stuffed the play and forced 4th and 1 and Kingsbury relying on his kicker to tie the game but his kicker came up short and the Dolphins came away with the win!

That game was reminiscent of the kind of fun we had watching Dan Marino lead this team to victory and hopefully it’s the beginning of many more old memories coming back as Tua Time is here!

Get This Weeks Prediction On TDS PODCAST!!