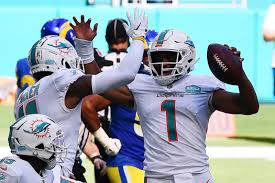 All week we heard how Aaron Donald and the Rams defense was going to dominate Miami’s offense especially considering this would be rookie QB Tua Tagovailoa’s first NFL start. And for the most part the Rams defense kept Miami’s offense in check as Tua on his first drive of the game was given a rude awakening as he was stripped of the ball by DT Donald and body slammed by DL Michael Brookers (Welcome to the NFL) but it was nice to see Tua get up from such a hard hit and continue to play. His turnover lead to the Rams early TD and a 7-0 lead.

The Dolphins overlooked Defense was the star of the game and along with Special Teams ace Jakeem Grant and a pedestrian first outing for Rookie QB Tua Tagovailoa who was 12/22 for 93 yards passing and 1 TD helped put together a total team effort to beat the 5-2 Rams 28-17 and a late TD helped give the Rams that 17 points.

The catalyst to the win was a stifling defensive plan that had the Rams QB Jared Goff confused and under pressure throughout the game forcing 4 turnovers including defensive end Emmanuel Ogbah’s strip sack that Outside linebacker Andrew Van Ginkel was able to pick up and jaunt 76 yards to score a Td to put Miami up by 7 points. (14 -7)

Goff was under constant pressure throughout the game and it was Miami’s defense that proved to be the one to fear! DT Christian Wilkins recorded his first interception of the his career in the first quarter when he dropped back into pass coverage on the snap, baiting Rams quarterback Jarod Goff into the pick. Showing his versatility and boosting his claims of being a WR/TE threat on offense much to head coach Brian Flores chagrin!

As for Tua this was his first start and he will hopefully learn from it and grow from it but the one thing he did not do is lose the game for Miami.

Head coach Brian Flores preached that this is a team game and that his expectations are that one unit will pick up the other and that is how it played out this day as not only the defense but special teams also contributed towards this win.

“I don’t think I played to the standard that this offense is capable of,”….“There were certain plays where I could have stepped up and made the right throw, made the right decision. But I’ve heard it many times from the guys in the locker room: It’s good that we still came out with the win. And aside from that, thank God we got a good defense.”

I suspect that as Tua gets comfortable with his teammates on offense and settles down and allow his game to come to him that our Defense will be happy to see this young man develop and play the way we all are expecting.

For all of you nitpickers, Miami did win the game and are 4-3!

Get This Weeks Prediction On TDS PODCAST!!