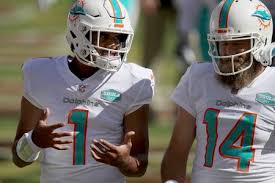 The debate will be endless, was this the right time? I will skip on pointless debates because a decision has been made and that’s really what is not up for debate. Ryan Fitzpatrick is out as Miami’s starting QB and Tua Tagovailoa is now the starter and as Ryan said in his heart breaking press meeting that this is different than when he was replaced by Josh Rosen last season a moved that was reversed less than 3 weeks later, this time seems more permanent.

My heart bleeds for Ryan because he really has played very well despite his 7 int’s and many Tua fans looking for any excuse to say it’s time to give Tua the starting job. You could tell with each poor game by Ryan that some would be calling for the rookie to get his shot!

The truth is it was not if but when it would happen and to me it doesn’t matter because I agree with the sentiment of many who say if the coaching staff feels Tua is ready as they have been watching and evaluating Tua since training camp and apparently they have seen enough in practice from Tua to feel it his his time to start. Even though I feel Ryan Fitzpatrick’s pain he above anybody knew his position with the team as the starter was just a place holder job that could end at any time and that time is now!

I have yet to have the “Tua Fever” that many of his supporters posses but I am warming up to him and will get totally on fire should he come out and play lights out starting Sunday November 1st against the Rams in Miami.

I also know this is really not about the present but the future so for Tua to potentially go through the growing pains many rookie QB’s go through I still will be patient with his development even though we all know that Tua’s QB peers drafted this year is already being compared unfairly to Tua.

My biggest concern for Tua is the high expectations many have heaped on him and should he not live up to them early on will that have a negative affect on his confidence? I also still question the length of time he has healed, has it been enough?

The timing also concerns me, could Miami have picked a more difficult DT (Aaron Donald) to face Tua? How good really is our offensive line? could it have been more about how savvy a veteran Ryan Fitzpatrick is?

Well we will soon get some answers and be able to judge for ourselves if the timing was right to star Tua.

Either way I wish only the best for Tua, but can’t help feel a sense of sorry for the situation Ryan Fitzpatrick finds himself in and I too thank “Fitzmagic” for making this past year and a half of a total rebuild enjoyable.

1 thought on “A Painful Transition!”