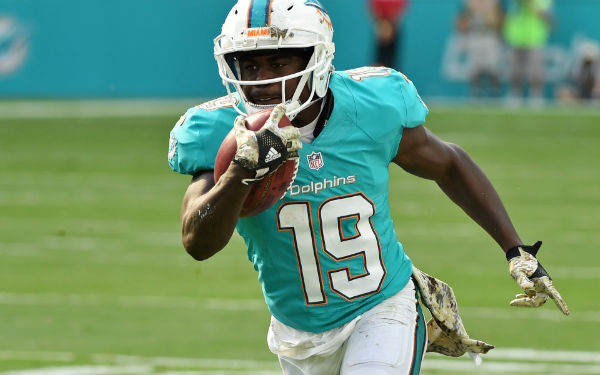 Many of you probably are not aware of how much value wide receiver/return Man Jakeem Grant brings to our Dolphins but after reading this article I hope you understand just how valuable Jakeem Grant has been to the Dolphins. When healthy he’s one of the top returners in the NFL, he’s also one of the fastest players in the NFL and as soon as he find his niche playing his role as a wide receiver I expect to see big numbers from Jakeem Grant very soon.

Jakeem Grant also has an infectious personality you can’t help but like the kid, I always likened him to comedian Kevin Hart, who he kind of favor and Grant seems like he is a very funny guy. If Jakeem Grant can stay healthy and put it all together with his value as a receiver to the Dolphins will skyrocket as he improves in his route running the sky’s the limit as to what the diminutive Grant can do.

Jakeem Grant value goes far beyond himself in fact his friendship with his “Uncle” has brought out the best in his uncle and the Dolphins last year really benefited from Jakeem Grant uncle, he’s the same person that’s been on this team for years and seem to not break out from his shy personality almost to the point where he seemed to lack the confidence in his skill set.

If you don’t know by now who’s Jakeem Grant’s uncle is you’ve not been paying attention, who’s the best receiver on the Dolphins team hands down, DeVante Parker and Parker seems to have developed a self-confidence (borderline cockiness) that can be attributed to his friendship with Jakeem Grant.

Last year Ryan Fitzpatrick knew how to utilize DeVante Parker’s height advantage and took shots downfield to Parker who was in beast mode, at 6’- 3” 175 lbs. Parker was unstoppable last season as he torched some of the best CB’s in the NFL, if you throw the ball in DeVante Parker’s radius he’s going to catch it and he embarrassed Stephon Gilmore (considered by many as the best CB in the NFL) in week 17 against the Patriots in a game that had playoff significance to the Patriots. Parker had 8 catches for 137 yards and an average of 17.1 per catch, against the best CB in the game.

DeVante Parker has come out with a personality that’s been hidden for years and of course, I don’t know them personally but from a distance, it appears that because of Jakeem Grant friendship it has immensely helped the development of DeVante Parker and I expect (barring any injury) that Parker is going to be one of the top 10 receivers in the NFL this year, maybe even top-five and I have a feeling that  Jakeem Grant is not going to be too far behind him.

Uncle and Nephew has developed a friendship and bond that will last a lifetime. I’m not sure if any of you have even noticed that DeVante Parker has his own cartoon called Uncle Vante and the funny thing about it is that they’ve been calling him Uncle for quite some time basically because of the height difference between DeVante Parker who is 6 ft 3 and Jakeem Grant who is 5 ft 6 but make no mistake about it mighty mouse has brought out the best in DeVante Parker and for that Jakeem’s value to the team and DeVante Parker has been priceless!