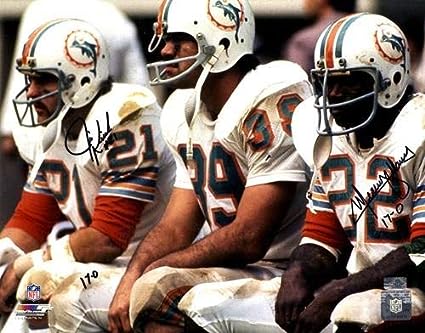 R.I.P Jim you were part of something that will last a life time and for generations beyond, I hear there’s an AWESOME Head Coach up there waiting for you, so get your behind ready!

If you don’t know who Jim Kick was he was a crucial part of the Miami Dolphins running game in the 1970’s, part of “the perfect Backfield” episode linked above.

James Forrest Kiick (/kɪk/; born August 9, 1946) is a former professional American football player, a running back for the Miami Dolphins in the American Football League (AFL) from 1968 to 1969 and in the National Football League (NFL) from 1970 through 1977, except for 1975 when he played in the World Football League.

He was a member of the undefeated 1972 team, and was an integral part of the ball-control running game which characterized the Dolphins under head coach Don Shula in the early 1970s. Kiick played in three Super Bowls and is the Dolphins’ fourth all-time leading rusher.[1] He and fullback Larry Csonka, known as “Butch Cassidy and the Sun-dance Kid,” in 1973 co-wrote a book, Always on the Run. They shocked the sports world in 1974 when they signed with the newly formed World Football League.

The personalities of Miami’s three headed run attack back then was perfect and they were an intrical part of the teams success as they all complemented each other very well.

It’s a shame to see these Miami Dolphins legends move on in life but there legacy and memories will last forever!

The Official Announcement from the Dolphins