There’s a famous quote that dates back to 1927 and has been rearranged and twisted like a pretzel but it originally was “It is easier to fall for anything than to stand for something!” also known as:

This adage is attributed to Alexander Hamilton, Peter Marshall, and others over the years.

Given the situation that our Country is going through, one of it’s most darkest times in history amidst a worldwide pandemic that also is sending us further into the abyss. One must carefully choose their words as there are two sides that are in stark contrast to what is happening in the Divided States Of America. If you are of a religious nature this looks like the End of Days are upon us as all hell seems to have broken loose!

History Of Those Who Speak Up

It’s easier to turn a blind eye or stick your head in the sand and hope things will go away, especially when you are not the one being hunted! Those who have shown the COURAGE to actually speak up have also become victims of the oppressors as the counterattacks by the oppressors is equally as effective as the senseless murders that have befallen Black Americans since being enslaved from Africa August 20th 1619.

Anybody who takes a stand are met with career suicide and sometimes the ultimate sacrifice of laying down their own lives just for speaking up, so to see Miami Dolphins head coach Brian Flores make a statement on a hot-button issue after another black person George Floyd who was unarmed died in the hands of the ones who are suppose to “Serve And Protect”!

Brian Flores statement on the death of George Floyd 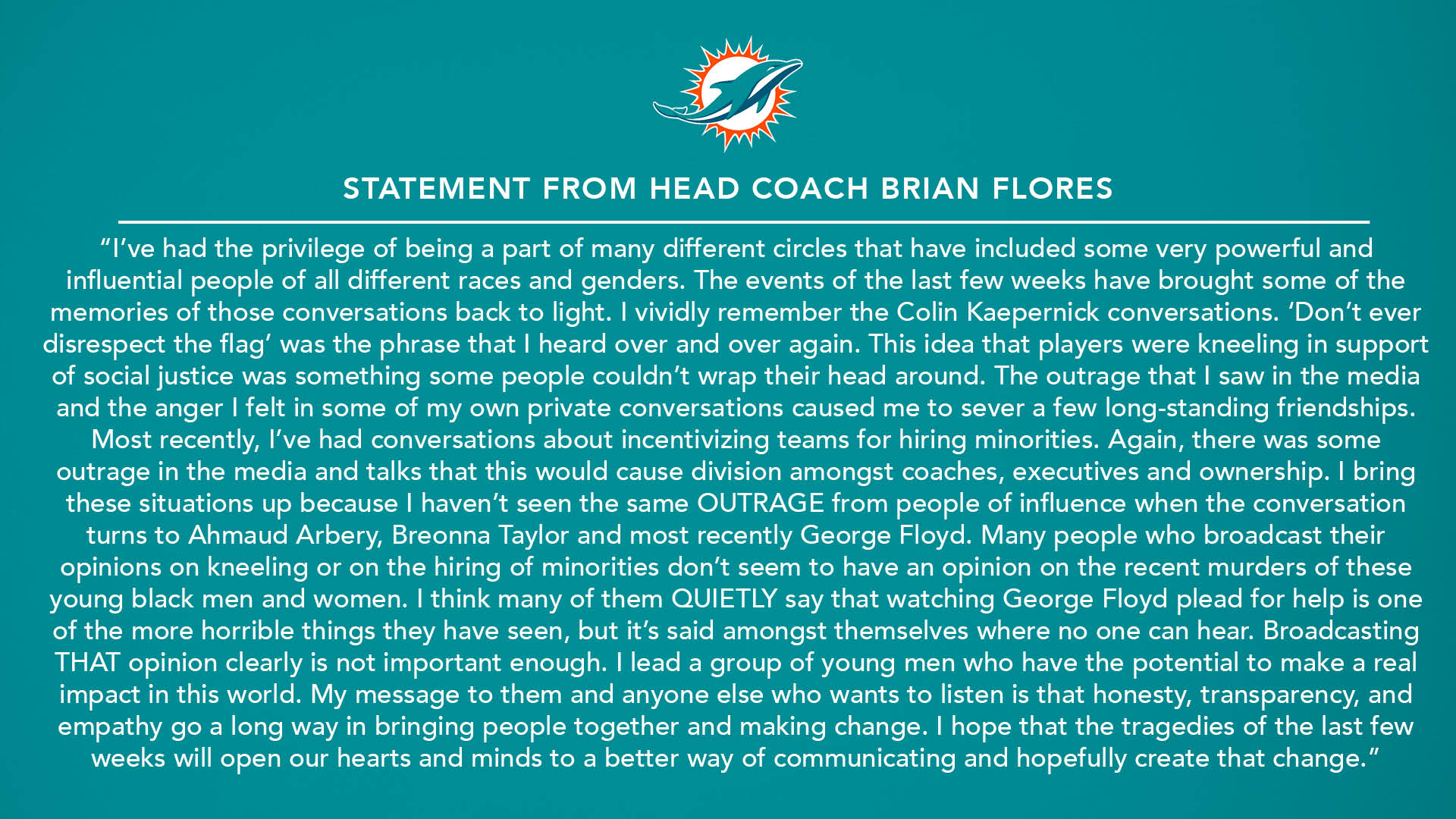 The response from Brian Flores statement has been mostly positive, but as I always say there will be people who will have a problem with a person who devotes their lives to planting flowers! So of course the natural response that the blinded comes up with is what about speaking up against the people who are looting and destroying their communities,why don’t Brain Flores say something about that?

First let my say that it is very courageous for Brian Flores to actually make a statement and to in so few words hit the nail on the head. The same people who used “Nationalism” to attack the Quiet Peaceful Protest of QB Colin Kaepernick and spoke against his kneeling in protest against the killings of innocent black folks dying in the hands of the police, are eerily Quite about the latest MURDER of another Black Soul George Floyd.

But these same Folks are more than happy to speak out against the protest and civil unrest in the aftermath of the death of George Floyd. The irony of it all is an age old debate that goes back to the two philosophies of two prominent Black Civil Rights Leaders in the early 1960’s Martin Luther King philosophy vs Malcolm X philosophy even though both men died without the fulfillment of their dreams being met.

Malcolm X sought a different approach to combat the Blatant Racism of the 1960’s he urged his fellow black Americans to protect themselves against white aggression “by any means necessary,” he did not believe in turning the other cheek but arming themselves and fighting back, a stance that often put him at odds with the nonviolent teachings of Martin Luther King, Jr.

Colin Kaepernick is the modern day example of the Martin Luther King Philosophy and what did it get him? Shuttled out of the NFL!

The Protesters are in many ways following the Malcolm X philosophy in no longer turning the other cheek and standing up for their rights. Unfortunately you have some people amongst the protesters with their own agenda and there are questions as to who they are…

It will most likely take BOTH philosophies to actually move the winds of change forward as the same issues that existed in the 1960’s for black Americans still exist today and there needs to be more than one way to attack this disparity that seems to have existed for far to long.

Miami’s Coach Brian has taken a stand and spoke out and up and even made what I feel is his greatest point when he said:

“I lead a group of young men who have the potential to make a real impact in this world. My message to them and anyone else who wants to listen is that honesty, transparency, and empathy go a long way in bringing people together and making change. I hope that the tragedies of the last few weeks will open our hearts and minds to a better way of communicating and hopefully create that change.”

That is why he is quickly moving up my ladder of favorite Miami Dolphins head coaches of all time I just need a few more W’s!