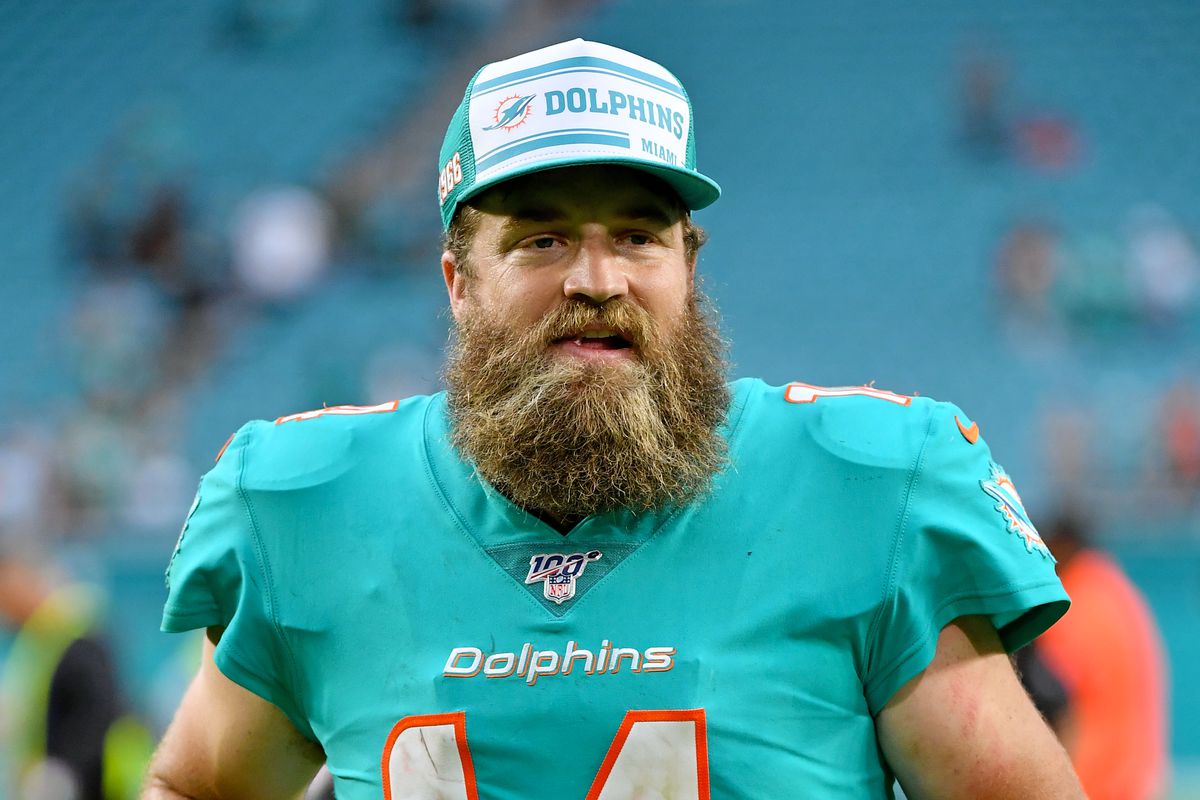 It’s either a stroke of genius or luck, but the Miami Dolphins quarterback situation is the best it’s ever been in the history of the team, no I’m not claiming that any one individual in the Dolphins QB room is better than Dan Marino, but collectively as a group the Dolphins quarterback situation is just perfect. I don’t think you can draw it up any better than what we currently have in Miami

It all starts with the wily veteran quarterback Ryan Fitzpatrick who the Dolphins we’re fortunate enough to land a year ago after striking out on Teddy Bridgewater who wanted too much money, Chris Grier wisely moved on. I can not give enough praise to our GM who’s been playing chess while everyone else has been playing checkers and as I noted in a previous article he has the Midas Touch!

So bypassing Teddy Bridgwater’s ridiculous request,  the Dolphins signed Ryan Fitzpatrick to be their transition quarterback as they worked their way through a total rebuild. As we all know things did not automatically start off right for the Dolphins and new head coach Brian Flores but the combination of Flores and Fitzpatrick where the engines that led the Dolphins to an amazing five win season, when most people had already counted them out as quitters, tankers and the worst team in the NFL history.

If there’s a lesson to be learned its that there’s too many people that have opinions on things that are not factual and in fact we’re totally fabricated by one rogue reporter looking for some National attention.

Thanks to Ryan Fitzpatrick’s sheer gut determination and wisdom he was able to lead the Dolphins offense in 2019 to a relative measure of success. Thanks to Fitz we finally found out wide receiver DeVante Parker is not a bust and can potentially be one of the top receivers in the league if they are able to duplicate or improved over last year’s stats.

Thanks to Ryan Fitzpatrick we also had a running game last season, nothing to boast about except for his own individual accomplishment since he was the leading rusher for the Dolphins last year. Much thanks to the wily veteran as he did a great job last year, but now he has even more responsibility and we can only hope that he does just as good (if not a better) job this year.

No, I’m not talking on the field, even though I know he wants to start, I’m talking more about in the quarterback room where his wisdom, knowledge and experience can be handed down to the two young puppies that we have as our backup quarterbacks, both hoping to eventually become the starter either for Miami or some other team in the near future.

So the Dolphins are extremely fortunate to have what I would consider a combination quarterbacks coach and quarterback in Ryan Fitzpatrick to assist these young men in their transition in the NFL.

We have Josh Rosen who was the 10th pick overall in the 2018 draft and he’s just 23 years old and believe me when I tell you there are certain teams out there in the NFL who are licking their chops to get a hold of this kid, because they too see the potential even before he’s been able to display it on the field, that’s why I continue to admonish the Dolphins management to hold on to Josh Rosen as long as they can at least up until the 2021 season.

Then we have our young Superstar extremely hyped quarterback Tua Tagovailoa who we all are hoping he lives up to expectations, as he will be the future quarterback of the Miami Dolphins sooner or later.

So these silly debates about whether Tua Tagovailoa should start or sit is really irrelevant because at 22 years of age when he takes hold of that position he’s going to be behind Center for our Dolphins for 10-plus seasons barring any setbacks.

The most important thing in handling Tua right now is whatever the doctors say should be done,  let the medical staff and the trainers determine his status and put a plan in place for his development. I’m sure the Dolphins will rely heavily on their medical staff for that decision.

This is going to be Ryan Fitzpatrick last year on the team possibly, because we can’t guarantee that the Dolphins might not see the value of extending his contract another year or two,  I’m pretty sure most fans would not argue that point because even if he’s not the starter he’s a very valuable piece to have in the quarterback room. Maybe he can transition to an assistant coach for the Dolphins when his contract is up.

Hopefully even now through virtual meetings they’re building a bond and a relationship that will help all three advance in their careers all to the benefit of the Miami Dolphins.