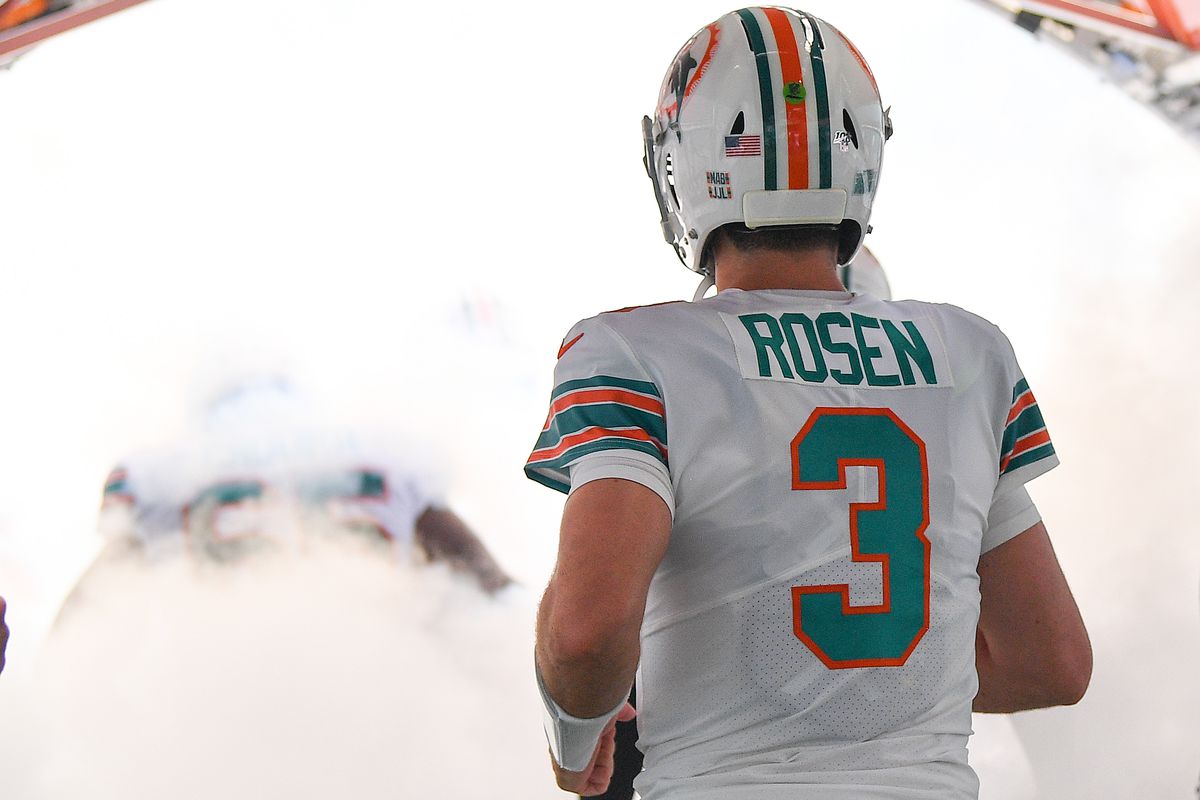 Unless there are some issues with Tua Tagovailoa’s injured hip, Josh Rosen’s fate is already determined and his stay in Miami will apparently be short-lived. At 23 years of age and with his whole NFL career ahead of him, Josh Rosen (who was taken 10th overall in the 2018 NFL Draft) should not want to settle at being a back-up QB this early in his career. I don’t see him wanting to be the backup to Tua Tagovailoa.

Josh Rosen’s destiny is in his own hands and all he needs to do is live up to his 2018 draft status, he needs to “Ball Out” this year, starting with the virtual class room meetings and on to the field (whenever they get to that point) he needs to prove that he’s ready to take the lead and he needs to beat out both Ryan Fitzpatrick and Tua Tagovailoa even if it’s just for the 2020 season.

That would be the ideal situation for not only Josh Rosen, but the Miami Dolphins who should be encouraging and promoting Josh Rosen to ballout and shine because his trade value will increase substantially and the way GM Chris Grier has proven to be such a great negotiator, I can see him potentially getting at a minimum of two first-round picks if not more from some team that’s looking to get a young quarterback of the future.

Miami’s QB room just like most of the roster is full of competition and that is a very good thing for our Dolphins moving forward.

Miami has veteran QB Ryan Fitzpatrick who since Tom Brady has moved on from the AFC East is the most experienced QB in the AFC East division and I argue the best QB as well. Fitzpatrick as of now is the starting QB if the season were to start today but he has chomping at his heels two young QB prospects that are hungry and want to be the starting QB for Miami.

Josh Rosen who was acquired from the Arizona Cardinals last year via trade as Miami traded a 2nd round & 5th round pick to the Cardinals for the young QB who the Cardinals wanted to deal after they drafted QB Kyler Murry a year after drafting Rosen.

Josh Rosen’s future is by far the most cloudy of the current QB’ on the Dolphins roster and has been a very compelling story for me as he’s been through a nightmare since being drafted in 2018. His early career has been the true definition of what “Murphy’s Law” and it is my hope that he can somehow turn what has been a lemon early career into lemonade and have a great camp, preseason and even leap frog Ryan Fitzpatrick as the presumptive starting QB in 2020.

Tua Tagovailoa is the future as Miami’s starting QB barring any medical setbacks. Drafted 5th overall in the 2020 NFL draft he is the face of the Dolphins organization despite not having taken one snap. There are legitimate concerns about his injury history and more specific his resent hip injury that was extremely severe. There are already debates going on as to when the Dolphins should start him. Until the Dolphins (who took a leap of faith drafting him) can get their hands on him and fully examine him it really is hard to conclude what should be done moving forward with Tua.

The Dolphins are in the best situation in recent memory when it comes to the QB room as they have the security blanket of a veteran QB who is charismatic, tough and very intelligent and behind him two young QB prospects who’s futures are yet to be determined both are in their early 20’s and both are high draft picks. It can’t be anymore Ideal for the Dolphins and the only thing that will make it better is if Josh Rosen who finally gets a chance to shine, makes the Dolphins decision at QB of the future as difficult as possible.