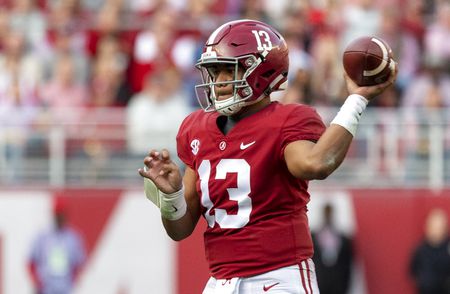 He’s already got a head start and he’s not even played one game, Dolphins rookie quarterback Tua Tagovailoa is already a star in the NFL and after a week of head spinning events the young millionaire has a lot of expectations that he must live up to.

But when you talk about coming out of the gate the hype and the expectations are through the roof for Tua Tagovailoa. Even with the uncertainty of the pandemic there’s nothing stopping this rising star and his future ahead of him is unlimited!

Just think of this, upon the Dolphins releasing his jersey number (#1), Tua Tagovailoa’s Jersey has been the number one and two top selling jersey’s so far out of the NFL shop. He’s even outpaced Joe Burrow, Tom Brady and Rob Gronkowski, in fact no  Jersey is outselling the young potential star QB for our Miami Dolphins.

Tua Tagovailoa has signed agreements with Adidas, Bose, muscle milk and Wingstop to name a few as endorsements are coming in droves and he has already set up charities in Hawaii, Alabama and Miami that vouches to his character. All he needs to do now is live up to expectations, and he will have not only south Florida but the world in his hands.

Now that he is signed and ready to go the biggest question surrounding Tua is when should he start?

Should Tua Tagovailoa start in 2020?

That’s a loaded question with many varying opinions. Some say yes, it is his team why wait? Others say no because they feel he needs to sit out the year and learn the offense and heal more from his hip injury. While others say sit him early and put him in near the end of the season. While others don’t want to risk him at all this year.

So what should Miami do?

The Dolphins have a very good situation when it comes to their QB’s, they have a very popular starting QB in Ryan Fitzpatrick who did an excellent job leading the team in 2019 to a 5 win season, despite expectations being much lower. Miami also have Josh Rosen who is just 23 years old and was also a first round selection (number 10th overall in 2018) as well as the future QB for Miami Tua Tagovailoa.

Ryan Fitzpatrick is on the end of his contract with Miami and also is near retirement and his future with Miami is short term no matter what, this should be his last season in Miami, Josh Rosen is the “Wild Card” in this situation because currently his value is at an all time low but he is really can be a very precious commodity if handled correctly by the Dolphins.

The ideal situation for Miami is to find a way to improve the value of Josh Rosen because he can be an insurance policy as well as potential trade bate and being that he is still extremely young and a former high draft pick and a QB. (a position of greatest value in the NFL)  Miami could easily get multiple first round picks if Josh Rosen shines this year and it is in their best interest to do everything they can to make sure he does.

As for Tua I am on board with him sitting a while and letting the QB situation between Rosen and Fitzpatrick works it’s way out this year and if you are a fan of Miami you should WANT Josh Rosen to win the starting job for Miami sometime this year because it is the best case scenario for everyone involved.