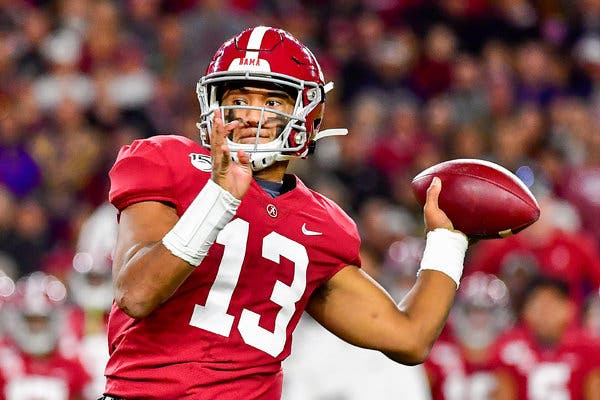 Tua Tagovailoa (pronounced TOO-uh Tongue-OH-vai-LO-uh) became a household name as a true freshman, replacing Tide starter Jalen Hurts at the start of the second half of the 2017 National Championship Game to lead the team to a comeback victory (14 of 24, 166 yards, three TD, INT). As a follow-up, Tagovailoa won the Maxwell Award and Walter Camp Player of the Year awards in 2018, along with SEC Offensive Player of the Year and second-team Associated Press All-American honors. He started all 15 games, completing 69 percent of his passes (245 of 355) for 3,966 yards, 43 TDs and six INTS. His junior season was cut to nine starts (180 of 252, 71.4 percent completion rate, 2,840 yards, 33 TDs, three INTs) as he fought through an ankle issue and then suffered a hip injury that ended his season but was not considered career-threatening. It was no surprise that Tagovailoa starred early in his career in Tuscaloosa. The Hawaii High School Player of the Year in 2016 (3,932 yards, 43 passing TDs) and son of an American Samoan father was a five-star recruit and the top dual-threat quarterback nationally, as well as the MVP of the Elite 11 competition.

Talented dual-threat quarterback with winning background, explosive production and loads of experience in high-leverage games. He may be pigeon-holed into a spread or RPO-heavy attack, but he’s actually a clean fit in a pro-style attack filled with play-action and roll-outs. He has the release, accuracy and touch needed to work all three levels successfully and can become a more disciplined, full-field reader to piece the puzzle together against NFL coverages. He needs better poise when pressured, but his escapability not only moves the chains, it creates chunk plays in the air and on the ground. Teams assessing his draft value will need to sift through mounting durability concerns and decide whether he is a “face of the franchise” talent without the abundance of talent surrounding him.

The Dolphins are serious about finding a Franchise QB as they used their 5th pick in the 2020 draft to take the Alabama star QB, despite some legitimate injury concerns GM Chris Grier said that talent trumps every time sighting a former player who had injury concerns coming out of college only to have a hall of fame career Curtis Martin.

This was a very popular pick by the majority of the fan base and a smart business move.

I actually was not one of those who agreed with the pick because we have QB Josh Rosen on the roster who I felt deserves a fair chance to earn the starting QB position.

After giving it further thought I have a change of heart because “Iron Sharpens Iron” and if Miami intends to keep both and have them compete for the starting job how can anything go wrong?

Here’s to wishing  you good health and longevity Tua and welcome to Miami!