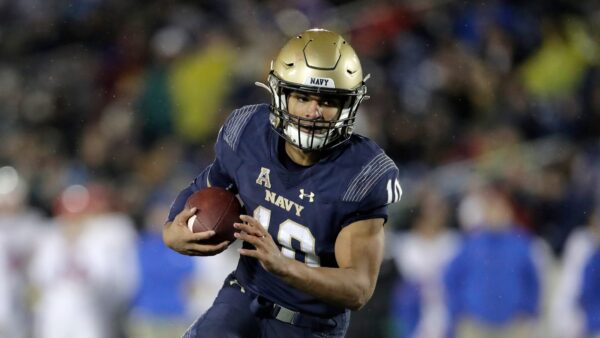 Perry’s parents both served in the Army, but he decided to attend the Naval Prep Academy for one year after leaving Kenwood High School in Tennessee as a two-time all-state player. He played in three games as a reserve in 2016 (9-73-8.1, one TD rushing) and then came on to lead the Midshipmen in rushing the following year (138-1,182-8.6, 11 TDs) splitting time between quarterback (three games) and slot back (nine games). Perry started the first five games of the 2018 season at quarterback before moving to slot back for the rest of the year (172-1,087-6.3, seven TDs rushing; 9 of 25, 222 yards, two TDs passing in 13 starts). He was one of the top playmakers in the country as a senior, receiving the American Athletic Conference Offensive Player of the Year award. Perry finished second in the country with 2,017 rushing yards and tied for third nationally with 21 rushing scores on 295 carries (6.8 per) in 13 starts at quarterback for the 11-2 Navy squad. He also completed 48-of-86 pass attempts (55.8 percent) for 1,084 yards and seven scores with three interceptions.

When a prospect starts off with traits like tough, smart and highly competitive, they are off to a very good start with important intangibles. While Perry checks those boxes, he’s undersized, moving to a new position, and lacks explosive twitch as a route-runner to uncover in short spaces. With play-callers becoming more creative, Perry’s production in option packages could open a lane for him as offenses love to create additional game-planning duties for defensive coordinators.

Offensive Swiss Army Knife he is dynamic, explosive and a weapon especially in a potential “Wild Cat” role for Miami some day. He played WR, RB & QB in collage and was exciting to watch just play his You tube Video above and you can see why Miami drafted him.