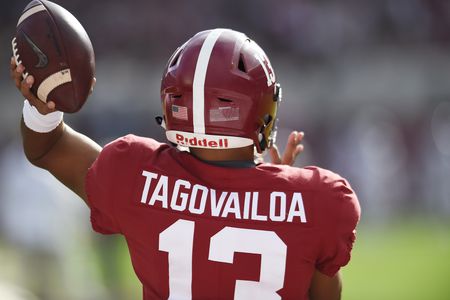 Many call him the left handed Drew Brees and one just need to study the film on Tua Tagovailoa to understand how that comparison is really not far off. Their stature is almost identical with Tua being 1 inch taller, their style of play is uncanny and ironically they tie into the Dolphins in very similar ways. The only question is which way will Miami go this time.

Drew Brees is forever linked to the Dolphins as the one that Miami let get away on more than one occasion. In 2001 when Drew Brees was coming out of college the Purdue QB was highly scouted by the Dolphins and was being considered by then VP of player personnel Rick Spielman. The Dolphins at the time had the 26th pick and Drew Brees was slated to fall somewhere in that area. The Dolphins head coach at the time was Dave Wannstedt who is a defensive minded person who also had equal say in how the Dolphins draft and to no surprise Miami drafted CB Jamar Fletcher even though we had Sam Madison and Patrick Surtain on the roster the best CB tandem in Dolphins history. The Chargers Drafted Brees with the 32 pick six picks later.

In 2005 when Drew Brees became a free agent and he was not expected to return to the Chargers as they had a young Phillip Rivers who they drafted in 2004 and payed well Brees was eventually franchised by the Chargers and given a one year contract that increased his pay to $8 million dollars for 2005. The only way any team could get Brees was via trade or a team sign Brees and give up two future first round draft choices in return. He was not traded and continued as the starting quarterback for the remainder of the 2005 season.

Drew Brees played very well in 2005 but in the last game of the 2005 season against the Denver Broncos, Brees tore his labrum while trying to pick up his own fumble so after the season, the Chargers offered Brees a five-year, $50 million contract that paid $2 million in base salary the first year and the rest heavily based on performance incentives to protect themselves.

After the Chargers refused to increase their offer, Brees met with other teams. The New Orleans Saints and the Miami Dolphins were interested in Brees. New Orleans made an offer that included $10 million in guaranteed money the first year and a $12 million option the second year. Miami was unsure whether Brees’ shoulder was completely healed and doctors suggested the team should not sign him because of the injury. The Dolphins ended negotiations and traded for Minnesota Vikings quarterback Daunte Culpepper instead. Brees signed a six-year, $60 million deal with the Saints on March 14, 2006 (Thanks to Wikipedia for  this information)

So as some would like to say the Dolphins passed up on Drew Brees twice, keep in mind there were serious concerns about Drew Brees ability to play at a high level after his injury. Even the Chargers had concerns, none the less things did not go well for the Dolphins after taking Culpepper over Brees and as we know Drew Brees is a hall of fame QB in waiting.

It is so ironic that the Dolphins once again are in play for a highly rated QB in the upcoming draft who has serious injury concerns and that player Tua Tagovailoa is considered to be a prototype of Drew Brees. You just can’t make this stuff up.

Many have already penciled in Tua Tagovailoa as Miami’s first pick in the upcoming draft, pick number 5. Others feel and hope that Miami will trade up with Detroit at #3 to assure that they draft Tua Tagovailoa as that is a slot where most likely if any team wanting the young Alabama QB will have to get to as the top two picks are a lock in just about everyone’s minds except for a few delusional Dolphins fans who think Miami can package their coveted draft picks (3 in the first round) and sell the Bengals on giving up their guarantee on drafting what many feel will be a young franchise QB Joe Borrow from LSU.

I am on the fence on even drafting a QB this year because I feel we have a young QB that the Dolphins OWE a fair chance to earn the starting job in Miami by letting him compete against Ryan Fitzpatrick again in the upcoming 2020 season and then look at the 2021 draft for their future QB if Josh Rosen fails to deliver in 2020. The Dolphins still have the resources in 2021 (2 first and 2 second round picks) to trade up and get a QB of their choice if need be.

Is Tua Tagovailoa a lock to be the next Drew Brees? Is Joe Borrow the next Tom Brady? How about the other QB’s who are rated below the top two? Is Trevor Lawrence the answer to Miami’s search for a franchise QB?

Only time will tell and the funny thing is most likely Mr. Hindsight will eventually blame the Dolphins management no matter who ends up being a franchise QB for any other team not named Miami.