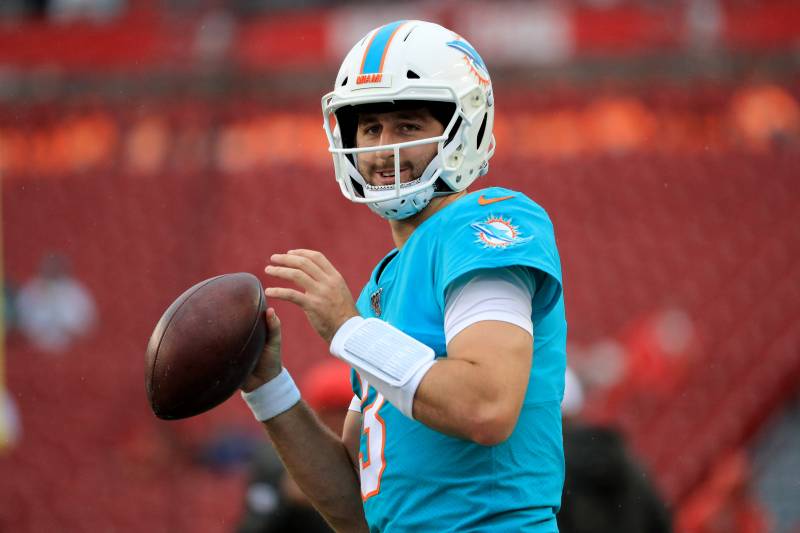 The Miami Dolphins should be in no hurry to rid themselves of Josh Rosen I know many people are wondering what’s going on with Josh Rosen why did they trade for him if they’re not playing him and all the other annoying questions that lack a little bit of common sense.

That’s why you have me to help you understand and to calm down some who are ready to go over the ledge worrying about the quarterback position.

If you’ve been paying attention lately I’ve been telling everyone that the Dolphins quarterback position is not in bad shape In fact they’re in very good shape the catalyst of it is definitely Ryan Fitzpatrick who has warded off our young prospect Josh Rosen doing the 2019 season.

Fitzpatrick’s presence is exactly what Josh Rosen needs because he’s going to have to improve in his levelof play in understanding of how to read defenses in order to beat out Ryan Fitzpatrick, so Josh Rosen already knows what he needs to do to win the starting job no matter who’s there at quarterback competing with him next year.

I anticipate and fully expect Josh Rosen to come back in 2020 hungry for the starting job and ready to compete after sitting out the 2019 season in learning behind the Wiley veteran.

We’re all unsure if the Dolphins will draft a quarterback in 2020 but the chances are high that they will and that’s okay even for Josh Rosen because competition should be welcomed by him and he should be ready to compete and fight for the starting job as he learned this past year it’s not going to be handed to him so he knows the mindset of head coach Brian Flores and what he needs to do to secure the starting job.

Josh Rosen is no burden to the Miami Dolphins in any way, he has a contract friendly deal that puts no burden on the team to rid themselves due to money.

The lion’s share of his 17 million dollar rookie contract in 2018 was paid by the Arizona Cardinals when they gave him a $10 million signing bonus, that left a little under $7 million dollars remaining and the Dolphins have him on the contract through the year 2023 so there’s no big hurry for the Dolphins to shed themselves of this young prospect, they can afford to allow him time to develop.

And that’s exactly what Josh Rosen is he’s a 22 year old kid who spent the last 2 years in the NFL under 3 or 4 offensive systems, he sat a whole year behind a wiley veteran and spent time in the quarterback room helping him to understand how to read defenses and improve his game.

He ran a scouts team and did all sorts of things that helps him in his development and as the Dolphins starting this off season work to build a team around him we will have a better chance to have a good evaluation of Josh Rosen in 2020.

Some look at his not playing at all near the end of 2019 as a negative, keeping true to my tagline, I look at it as the Dolphins looking out for him and protecting his interests because they know that not too many rookie quarterbacks would have succeeded on this team last year.

The Dolphins need a lot of talent to be added to this roster especially on the offensive and defensive lines as well as the running back position.

That’s why Ryan Fitzpatrick was able to succeed because he’s a veteran quarterback who’s been around the block and he knows just about any defense that’s out there.

I find it odd that too many people want to put that burden on this young 22 year old quarterback as if he should be as advanced as a 15 year veteran, It’s just not going to happen. Some people take time and teams who allow that time for these young quarterbacks to develop are often rewarded.

I can use no greater example than that of Aaron Rodgers who sat for about 3 years before he got his starting opportunity in the NFL but he also has stability for those three years that he sat.

If Josh Rosen can play 3/4 of the way that Aaron Rodgers has played or better then we have our franchise quarterback already.

The Dolphins would be wise to continue on drafting young quarterbacks and developing them and having them compete against each other and let the best man win, in the long run it’s going to be a win-win for the team anyway because some quarterback needed team will be paying attention to the development of our young quarterbacks.

Rest assured that the Dolphins are in pretty good position when it comes to the quarterback position, what needs to be done now is team building around our young quarterbacks that we will have on this roster in 2020 and beyond.

We live in a increasingly inpatient society you need to look no further than the way people drive nowadays to show that patience is thin,  but at the saying goes patience can also be a virtue and that truly can be the case with Josh Rosen.

Look how much better Ryan Tannehill played when he got to a team that was built to win with limited help from the quarterback, had Josh Rosen been on the Tennessee Titans this past year do you think That team would have been that much of a difference.

Give Josh Rosen a good blocking offensive line and Derek Henry and I’m pretty sure they would have done just as well and maybe even better, after 7 years of hoping that Ryan Tannehill would be something that he never turned out to be, many or wondering how can it be that he turned out to play so well for the Titans.

You need look no further than Derek Henry who they leaned on to get them to where they were.

Josh Rosen deserves every bit of a chance to have a good team built around him so he can have the success that we all expect from our quarterback,  like I said in the worst case scenario if someone beats him out then he becomes valuable in a future trade or as a quality backup so there’s should be no big hurry to get rid of Josh Rosen.