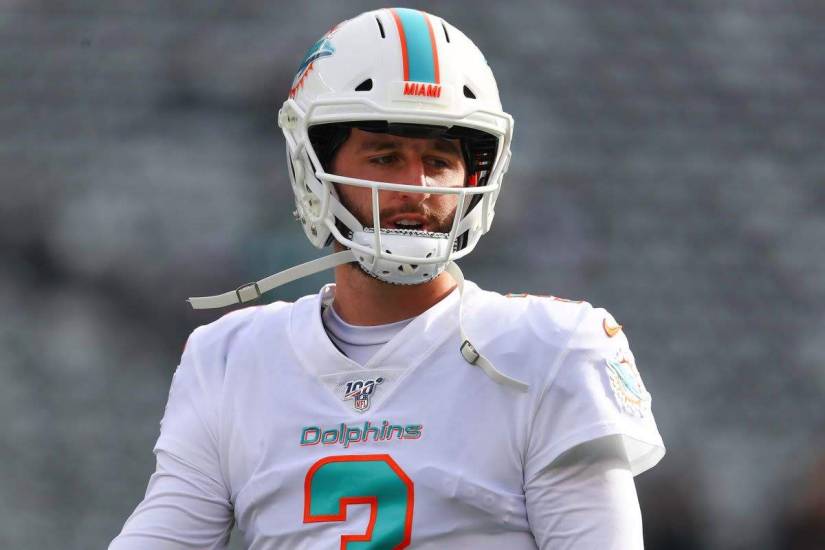 All you hear is that the Dolphins need a quarterback and when you hear the pundits, sports writers and fans talk about the quarterback position for the Miami Dolphins, it’s as if Josh Rosen does not exist.

In fact since the Dolphins benched him he’s  been just about invisible, oh we would see him every once in a while when a  pan shot from the camera during the games you might get a glimpse of him sitting next to Ryan Fitzpatrick or just holding the clipboard.

So what’s going on with Josh Rosen?

As you know my glass os always 3/4 full or more, I’m the ultimate optimist and so I’m going to give you my positive opinion on what I think is happening with Josh Rosen.

It goes back to my early position on Josh Rosen and I stand by that today. I felt Josh Rosen should not have played one game last year, he should have sat the entire year and learned behind the wiley veteran Ryan Fitzpatrick.

Starting him when he was not ready is the worst thing for a young quarterback. It also created an opportunity for some to form a negative opinion of Josh Rosen.

The reason why I felt that way is because of the condition of the team, this team was stripped of all the talent and what they had was a roster of hodgepodge players that most likely will not have a long NFL career.

As the season has concluded so will  the careers of many on the roster who will not be on this team this year.

As the Dolphins go into phase two of the rebuild there’s going to be an upgrade of talent to the roster.

The two areas that need the biggest makeover are both the offensive and defensive lines, they’re not good enough, there’s going to be some players who will be held over and come back for competition and most likely end up either starting or being depth players.

Starting with free agency the Dolphins will start to build this roster into a competitor.

So what about the quarterback position of the Dolphins. If you realistically look at it, it’s not in bad shape in fact I would have no problem if the Dolphins bring back both Ryan Fitzpatrick and Josh Rosen and have them both compete for the starting job next year.

The ideal situation is to draft a quarterback in 2020 or 2021 and have them compete against Josh Rosen for the starting job and eliminate Brian Fitzpatrick.

So what’s going on with Josh Rosen? The answer is simple player development. What Brian Flores quickly realized after the debacle of giving Josh Rosen the starting job And saying he would be the starter for the remainder of the season only to do an aboutface and reinsert Ryan Fitzpatrick as the starter.

It was a mistake to rush Josh Rosen out there on the field and I’m pretty sure he felt the pressure because that’s what the media in every second guessers tend to do, try and dictate to the team what they think the Dolphins should do.

That’s why in the final weeks of the season there was a big cry to start Josh Rosen but this time Brian Flores did not fall for the trap because he knows that Josh Rosen needs more time to develop.

The Dolphins have invested draft picks, time and money in Josh Rosen and now what they’re doing is slowly developing him and teaching him with the hope that he comes back next year ready to compete for the starting job.

For the Dolphins this is a win-win situation because if Josh Rosen takes hold of the starting position than the Dolphins have their franchise quarterback, on the other hand if the Dolphins either through the draft or free agency bring in another quarterback that beats Josh Rosen out then the Dolphin still have developed him to the point where he’s valuable trade bait.

Brian Flores said Josh Rosen has talent and he’s a good young quarterback, he’s been doing an excellent job running the scout team and playing his role as backup quarterback.

Unfortunately for Josh Rosen he’s going to have to learn a new offensive system once again, this is his fourth one in his two short years in the NFL.

I personally am rooting for Josh Rosen to stay with the Dolphins and become our franchise quarterback, I’ve been impressed with how he’s handled himself throughout the ordeals he’s been through in his short NFL career.

Josh Rosen reminds me a lot of Aaron Rodgers who had to sit behind Brett favre for 3 years but when giving an opportunity to start he stepped right in and did not miss a beat.

Aaron Rodgers credited the fact that he had to sit behind Brett favre as the reason why he developed so well. Aaron Rodgers also dealt with plenty of adversity starting with the day he was drafted, he was passed over by multiple teams despite being considered a top draft pick he ended up on the Packers roster.

That turned out to be the best thing to happen to him in his career as he is one of the best quarterbacks to ever play for the Packers.

So I have no problem with what’s going on with Josh Rosen because I think it’s the best thing in everyone’s interest, the Dolphins, Josh Rosen and the fans because one way or another we’re going to benefit from the development of Josh Rosen.