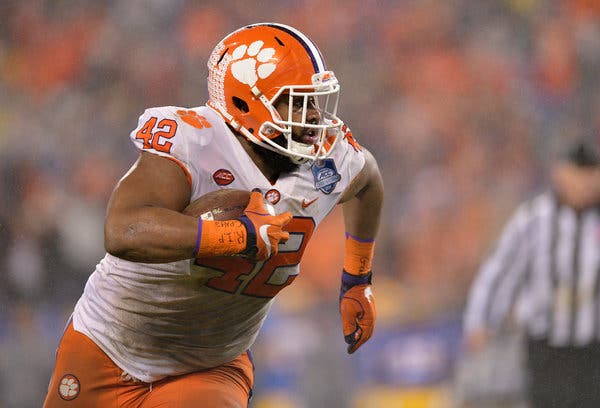 Not only is Wilkins a star defensive lineman for the Tigers, but he was also the first scholarship Clemson football player to earn a degree in just two and a half years. His work in the classroom, in the community and on the field earned him the prestigious William V. Campbell Trophy after his senior season.

Wilkins was also a first-team Associated Press All-American and first-team All-ACC selection for his play (57 tackles, 15 for loss, six sacks, two forced fumbles), which helped the Tigers win their second national title since he arrived on campus. The top 25 national recruit broke out in a big way his freshman year, earning Freshman All-American honors by racking up 84 tackles, 4.5 for loss, and two sacks in 15 games.

Wilkins had 10 tackles in 35 snaps against Oklahoma in the Orange Bowl that season. In the team’s 2016 national championship season, he was a third-team Associated Press All-American and second-teams All-ACC selection, starting all 15 games and compiling 56 stops, 13 for loss, and 3.5 sacks. He also set a school record for defensive linemen with 10 pass breakups. Wilkins was a permanent team captain in 2017, starting all 14 games, making 53 tackles (8.5 for loss, 4.5 sacks) playing primarily inside after spending time at defensive end in previous seasons.

His grandfather, Eurie Stamps, was killed when a SWAT team rifle accidentally discharged during a raid of his apartment in January 2011. They were looking for Stamps’ stepson and two friends accused of selling drugs from the apartment. Wilkins split time during middle and early high school living with his stepfather (where he was when the raid took place) and with Stamps.

Desired combination of athleticism, production and character with the ability to fit into a stop unit that already has some pieces in place. Wilkins is a slippery, upfield three-technique with the ability to make plays outside his area. He plays with low pads allowing for optimal disruption leverage in the gaps, but he needs to be paired with an attacking front as he lacks the length and strength to hold his ground as a read-and-react tackle. He’s busy and agile as a rusher, which could keep him on the field for more snaps.

Knowing we were headed towards a MEAT & POTATOES draft there is no better way to start to rebuild our Defense than with a young DT stud who possess the flexibility and speed that Wilkins does. He is also an extremely intelligent player and that will be the theme carried on throughout the Dolphins drafting process “INTELLIGENT PLAYERS” He also was used as a Full Back like an ICE BREAKER in Clemson’s offense talk about flexibility!!!!! I look forward to seeing this young man grow and develop as Miami future dominant DT!

Welcome to Miami  Christian Wilkins have fun and Wreak Havoc!!!