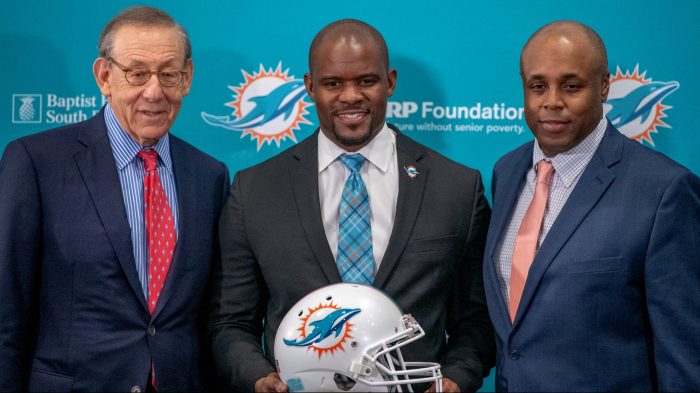 Unfortunately we once again approach the best time of the season for the Miami Dolphins the off-season, how I long for the days when this team was relevant and was in contention for the playoffs on a regular basis.

That is the stated goal of GM Chris Grier as he embarks on a total rebuild of this Dolphins team as they go through their evaluation of the current roster I expect major change as this roster gets churned.

Next week at the NFL Scouting Combine at Lucas Oil Stadium in Indianapolis, Indiana will be the unofficial start of making deals and behind the scene agreements on trades that teams looking to improve their rosters or move on from certain players.

March 13th is the “OFFICIAL” beginning of Free Agency and in times past the Dolphins were major players, often signing high-priced free agents with the idea that they were a player or two away from  being a playoff contender.

After blowing millions of dollars and still being no greater than a .500 team the Dolphins, led by unshackled GM Chris Grier are headed in a different direction as talk of rebuilding and a lowering of expectations have been established.

So exactly what should we expect? Well, expect the Dolphins to be bargain shoppers in free agency, also expect them to move on from most of their veteran players (Minus the oldest “41 years young” and longest tenured player on the roster John Denny who was resigned for 2019 avoiding free agency) The Dolphins will bring in young low-cost veteran players via free agency and hopefully pay their young veteran free agents like (Ja’Wuan James) the money they deserve.

Miami can save a ton of money with the rebuild by purging this roster of overpriced and aged players and despite some hometown favorites possibly moving on, now is the time to make those moves in this rebuild.

Potential Savings  If These Players Are Released:

Also look for  Miami to purge the roster of older players making room for an influx of young players via free agency, the draft and UDFA players. I am looking at just about half the roster being turned over this season alone.

Football has become a 365 day sport and for some addicts such as myself the off-season is where hope abounds after the major disappointments of the last year.

So we are conditioned by the Dolphins that CHANGE IS COMING and to not worry about the 2019 season win/loss total with some even preaching TANKING as their goal. I hope that the Dolphins do make changes, in fact they have on the management side as Chris Grier has added some quality individuals on his staff to aid in the rebuild.

I can deal with a season of lowered expectations as long as they are headed in the right direction as they finally add a rudder to this ship that has been wandering aimlessly for far to long!