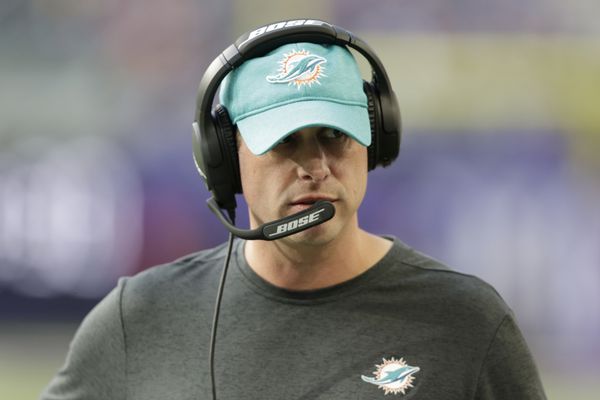 As I sit back and wonder what went wrong for Adam Gase in Miami I came up with three critical things that hurt his short career in Miami.

The biggest reason Adam Gase failed was his putting trust in Ryan Tannehill as a starting quarterback and I will admit I am just as guilty because I backed Ryan Tannehill all the way up until the beginning of this season when I noticed that his play really seems to be consistent to what we’ve had for the past seven seasons.

Unfortunately for Adam Gase who was dubbed the “Offensive Guru” and “Quarterback Whisperer” Ryan Tannehill never really developed into that franchise quarterback we’re all looking for. Hopefully Tannehill will be the final Purge by whoever the new head coach will be.

The second reason was bringing on an inexperienced defensive coordinator even his original choice newly fired Vance Joseph to be quite honest did not do well with that wide 9 defense. After Vance Joseph left the Dolphins Adam Gase promoted Matt Burke a first-time defense coordinator who in the last 2 seasons never really developed the defense and in fact the defense seemed to have regressed.

Defense is that one area where in this league you really need to be solid especially against these offenses today.

The third and final reason Adam Gase failed fall squarely on his own shoulders. Adam Gase who is considered an offensive Guru never really got this offense to play consistently and to me that falls back on reason one relying on Ryan Tannehill and secondly having the worst luck in the world when it comes to injuries this season.

Adam Gase’s play-calling was just as erratic as the performances of Ryan Tannehill. I strongly believed Adam needed to relinquish his play calling and focus more on his overall responsibilities on all three sides of the ball.

I’m pretty sure there’s a host of other reasons why he failed but these were the three main reasons that I could come up with as to why Adam Gase is no longer a Dolphins head coach. Hopefully lessons can be gleaned from this and become a factor in their search for the next head coach.