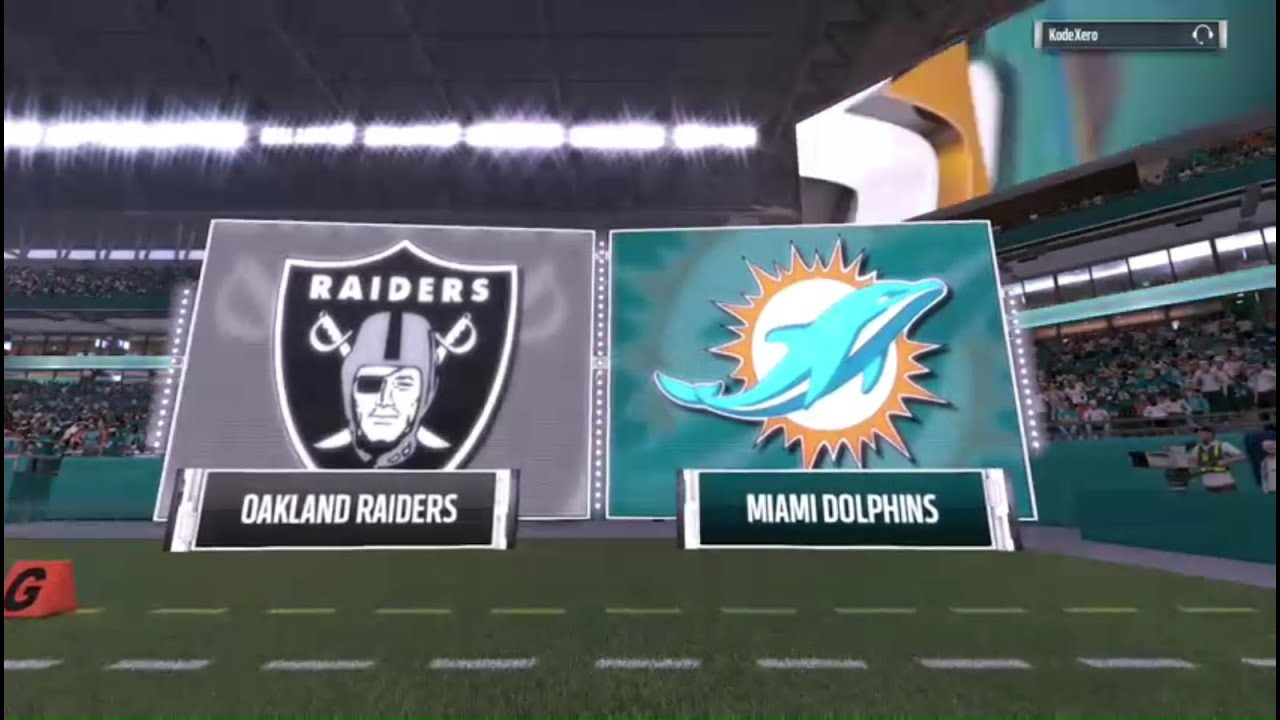 The Oakland Raiders ( 0 – 2) come to Miami ( 2 – 0) struggling out of the gate under new head coach John Gruden and it just might take a season or two to get the Raiders where Gruden envisions them being. The one thing that really boggles many of our minds is how in the hell did they let Khalil Mack get away? For now it looks like the Bears made an extremely wise move plucking Mack away from the Raiders.

Despite starting 0-2 this game is not out of reach for the Raiders to take because the Dolphins (2-0) still looks beatable as the offense is still a work in progress and Ryan Tannehill’s pedestrian numbers have me extremely concerned because after waiting 7 years I just expect more from Ryan and am starting to see what the other half of the Dolphins fan base have been screaming about these past 7 seasons…..Ryan is not that great.

The Good news is Miami has played well as a unit and particularly on the Defensive side of the ball. Miami’s Defense has played better than I had anticipated so far but I have questions about the sustainability of the team because both teams that Miami have beaten are suspect as to how good they are.

Even a win tomorrow (I expect Miami to win) will not silence the doubters more than a loss will hurt as Miami will be questioned and the doubters/haters will be in full force should Miami lose tomorrow, so stay tuned because we are hours away from a no win situation for Miami short of a complete blowout!

On to the matchups:

The matchup: on Offense

The matchup: on Defense

The Dolphins should not look past this dangerous Raiders team as they just might be stumbling out the gate and a team like Miami that is still trying to find their own identity have no time to be taking any team lightly. ( See Lobster Trap Game)

Ryan Tannehill needs to play better there is not doubt about it, he owns Miami’s 28th ranked passing attack and that is just not good enough for a supposed to be franchise QB!  The good thing is Miami’s rushing attack and that is a reflection of three things going well… Play Calling, The Offensive Line and our running backs. That also happens to be the apparent weakness of the Raiders stopping the run. So Miami should test that and have a heavy run game plan to see if the Raiders can stop them.

It also would be nice if Tannehill can step up his passing game and do a much better job of protecting the ball. Play calling has been a pleasant surprise and the RPO/ RO game by Ryan has been his best attribute to date!

I would love to see Miami take advantage of the speed we have on offense and stretch the field more by throwing more deep balls and getting Grant in space as well as Albert and Stills if we can get this QB on track with the passing game Miami could be a very difficult team to deal with for anybody!

The Raiders are in the early stages of the John Gruden era I was never a big Chucky fan because I have always felt he was overrated and might be a bit out dated and only time will tell for the latter.

The best weapon they have is their passing attack and despite his play not being as good as they would like David Carr is still proving to be better behind center that Ryan Tannehill and Miami’s secondary will be tested better than they have in the previous two games. If the game rest on the QB’s arm than the advantage is clearly in the Raider favor. Look for the Raiders to still try and keep a balanced attack and run the ball early and see if they can have better success against this upstart Dolphins defense.